Hi Everyone!
The response to Tangled has been amazing – more than I ever dreamed. My sincerest thanks for all your excitement and support!
I know some of you were disappointed that there was no Epilogue in Tangled, so below, I’ve posted a short future scene – from Kate’s POV – that will give you a peek into Kate and Drew’s life after Tangled’s end.
In the coming days and weeks, there will be a few more scenes like this.
I had such a good time writing these characters, my hope was, that you would have as much fun reading about them as I did when writing them.  It is the greatest joy to hear that you did.
My very best to you all,
Emma
*********************************************************
The Bitch Strikes Back

Men love Star Wars. Not in the same way women love Titanic or The Notebook—I cry every time I watch them. But Star Wars is different for men. It’s not just entertainment.

They believe in it.

It’s their handbook, their Bible. Apparently, all the secrets of life can be found in George Lucas’s films. At least in the first three. According to Drew, the last three “suck ass.”

Drew and I have been living together for just over a month. But it feels like it’s been longer. You know when you get your hair highlighted? And after just a day or two you can’t remember what you looked like before? Can’t imagine a time when your hair wasn’t this vibrant, multifaceted shade? It’s a lot like that.

There we are—on the floor, snuggled under a pile of pillows and blankets, eating popcorn—while Han Solo is about to be frozen in carbonite. Oh, and Mackenzie is here too. Alexandra and Steven asked us to watch her for the afternoon.

Drew’s eyes don’t stray from the plasma. “What don’t you get?”

I sit up as I explain. “The man is most likely about to die, and the woman he’s wanted all this time finally tells him she loves him—and what does he say? I know? What kind of line is that?”

“Why didn’t he just say he loves her too?”

He sits up, giving me his full attention. Prepare to be tutored in the finer points of male logic.

“Because he’s Han freaking Solo. He’s the coolest guy in the galaxy. He doesn‘t have to say he loves her—look at everything he’s done for her. She should already know.”

Typical. I shake my head and look down at Mackenzie, who sits between us. “When you fall in love? Go for a guy like Luke.”

Drew is highly offended. “No. No way…”

“Luke is a whiny little bitch until Return of the Jedi.”

Mackenzie reaches for her calculator and adds ten to the tab. Did you miss the Bad Word Jar that’s sitting on the coffee table? Yeah—it’s almost full. I say Drew should just buy her a Ferrari now. By the time she’s old enough to drive it, they should be about even.

“If you decide you want to get married, Mackenzie—someday—it should be to a guy like Han.”

Mackenzie turns her head from Drew to me, like she’s watching a match at Wimbledon.

“He’s selfish and egotistical. Always running off in his space cruiser—”

“That’s the Millennium Falcon to you,” Drew interrupts.

I ignore his correction. “And he’s obviously a playboy! A womanizer. Why would you want Mackenzie with someone like that?”

“Correction: he was a womanizer. Until he met Leia. She changed him. And Mackenzie—like Leia—is going to be smart, strong, and powerful. She’ll eat a weakling like Luke for breakfast. Han, on the other hand, will keep up with her. Keep her satisfied.”

He smirks—in that way that makes my stomach tighten—as he adds, “Like us.”

Drew’s voice drops suggestively. “I guess I’ll have to work harder, then.”
And just like that, we’re in Lust Land. Get used to it—it happens often.  Our gazes lock, and our mouths gravitate towards each other. Don’t worry about Mackenzie; it’s nothing she hasn’t seen before.

Drew is big on the PDAs. Because when it comes to affection—and everything, for that matter—he’s impatient and spoiled. So if he wants to touch me, kiss me? He does. And he really doesn’t give a damn who’s around at the time.

It can be a real turn-on—or incredibly frustrating, depending on the circumstances.

Before our lips touch, the phone rings. And Mackenzie’s blond head pops up between us.

Has a nice ring to it, doesn’t it?

She listens to the receiver, then turns to Drew. “Uncle Drew, it the doorman. He say there a package for you.”

She does. Then she listens again and says, “He say it per-ish-able.”

Drew’s brow furrows, wondering what it could be. “Okay. Tell him to send it up.”

Drew pauses the movie. Before he stands, he picks up my hand and kisses it softly. And his eyes promise more to come.

This is our first clothed weekend. And although I adore Mackenzie, I’d be lying if I said I wasn’t looking forward to some non-G-rated activity later on. Yes—my name is Kate, and I am a newly indoctrinated sex addict.

But come on, look at the man. Can you blame me?

Drew opens the door, and a uniformed man hands him a clipboard before sliding a large cardboard box—with holes on top—through the doorway. Drew signs, looks down at the box, and kicks it with his foot. “What’s in—”

Before he can finish, a chorus of sounds emerges from the box.

Mackenzie’s jaw drops as she runs forward. “It sounds like kittens!”  She takes the lid off the box. “It is! Is a whole box full of kittens!”

Is it ever. I stand up and peer inside. Eight kittens, to be exact.

Drew looks accusingly at the deliveryman. “What the fuck is this?”

“These are your foster kittens.”

“You signed up to be an animal foster parent. These are your wards for the next four to six weeks.”

Drew is already shaking his head. “I didn’t sign up for shit. I hate cats—they’re Satan’s pets.”

Kitten Man hands Drew the clipboard. “That’s not what it says here.”

By this time, Mackenzie is cooing and petting the box of meowing fur. And I cover my mouth to keep from laughing.

Have you figured it out yet?

“I’m going to kill her. I swear to God! I’m gonna be an only child by the time this day is over!”

That’s when I start laughing. Loudly. As I ask him, “What did you expect? You had a farm animal delivered to her condo on Christmas morning.”

“That was a gift! This is just mean.”

Drew hands the clipboard back to Kitten Man. “Take them back. There’s been a mix up. They can’t stay.”

Kitten Man looks disappointed. “That’s too bad. Without you, these little guys will be euthanized by the end of the day.”

Big round blue eyes stare up at Drew.

Drew looks at her sad little face for about five seconds. Then he lowers his head in defeat. “Goddamn it.”

I smile at Mackenzie. “It means the kittens are staying, sweetie.”

“Yippee!” She starts taking them out of the box one by one.

Then he kicks the door closed.

“I’m gonna name you Nala, and you Simba, and you Fluffy, and you Muffy…and I’m gonna call you Drew Junior! He look like Uncle Drew, don’t he, Aunt Kate?”

Oh yeah—I’m already Aunt Kate. How great is that?

“He does. He’s very handsome and seems smart too. Don’t you think, Drew?”

He’s still pouting. “Yeah. Fantastic. Hey, here’s an idea—let’s take Drew Junior and his buddies down to the Hudson River and see if they can swim?”

I saunter towards my boyfriend. “You don’t want to do that.”With Mackenzie’s focus still on the kittens, I slide my hand under Drew’s T-shirt and scrape my nails over his abs.

That gets his attention.

I keep my voice low. “Nope. Because rescuing poor defenseless animals gets me really …hot.”
Drew raises his brows. “How hot?”

I lick my lips. He watches.

“Very. I’ll probably need you to cool me down with…ice cubes…or whipped cream…”

He puts his hands on my hips and pulls me forward. “Mmmm. Maybe…kittens have their good points after all.”

I smile and nod. And then our mouths are joined. I wrap my arms around his neck, and my feet leave the floor as Drew lifts me up.

Just as his tongue comes out to play, Mackenzie calls out, “Uncle Drew! Simba went pee-pee on the rug!”

He sighs. And presses his forehead against mine.

“I’m sending The Bitch the bill when I get these carpets cleaned. No…better…I’ll have them replaced. That’ll bite her in the ass.”

I don’t want him too focused on a war with his sister. Not when there are so many other—more enjoyable—things he could be focusing on.

“Let it go, Drew. And after Mackenzie leaves, you can bite my ass instead.”

He laughs. And nips at my earlobe. 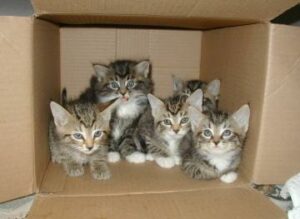 ★ My next release, GETTING REAL, is now availabl

Sunrise on the beach