***
Last semester a member graduated early, then got shipped abroad by his Fortune 500 company. My fraternity big brother lobbied strongly for me to get a room here in the house. A big brother is the guy you’re paired with when you’re pledging a frat. He’s the guy who gives you the hardest time. You’re his bitch—his slave.
But after you become a brother, he’s your best friend. Your mentor.
As self-loathing threatens to swamp me, my big brother just happens to walks past my open door. Out of the corner of my eye I see his dark head pass, pause, and back up.
Then Drew Evans strolls into my room.
Drew is like no one I’ve ever known. It’s as if there’s a spotlight on him that never dims—he demands your notice. He walks around like he owns the world, and when you’re with him? You feel like you own it too.
Deep blue eyes that all the girls go stupid for look down on me disapprovingly.
“What’s wrong with you?”
I wipe my nose. “Nothin’.”
His eyebrows rise. “Doesn’t look like nothing. You’re practically crying into your pillow, for Christ sakes. I’m fucking embarrassed for you.”
***

In Case You Missed It – Overruled Teaser #1 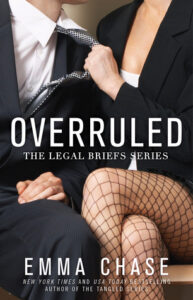 New York Times bestselling author Emma Chase writes contemporary romance novels known for their clever banter, emotion, and sexy, swoon-worthy moments. Her books have been translated in over twenty languages around the world.

Emma lives in New Jersey with her amazing husband, two spirited children, and two adorable but badly behaved dogs. She has a long-standing love/hate relationship with caffeine.